The environment is currently on the global agenda, and media, press, Internet, etc. are not far from this topic. Let’s check some campaigns about climate change and decide which campaigns have packed the biggest punch.

When it comes to climate change adverts, we have seen everything from melting polar bears to electricity conscious orangutans. But which ones really stood out from the rest? Campaigns by 350 and Liberate Tate proved popular among the public, so here is the a list that we have created with the most striking ads:

There is no denying that WWF has produced a staggering number of climate change campaigns over the years, featuring evocative images from displaced seals sleeping on park benches to Tarzan swinging across a barren rainforest. The one that has lodged itself firmly in Julie Mollins’s mind is the picture of a shadow where a tree once grew.

Following environmentalist Bill McKribben’s mantra that ‘if it’s wrong to wreck the climate, it’s wrong to profit from that wreckage,’ the Fossil Free campaign attempts to get public institutions, such as universities and churches, to stop using fossil fuels.

Reforming policy is crucial to stopping climate change, so Greenpeace and TckTckTck teamed up in 2009, they had their eyes firmly set on leaders attending the COP 15 conference in Copenhagen.

Over 600,000 people have joined GetUp!, Action for Australia’s movement to make democracy participatory. One of its biggest campaigns is a bid to protect the Great Barrier Reef. A recent petition to their federal environment minister has attracted some 120,000 signatures. The Arctic often features heavily in global warming adverts, but what campaigns are created in the region themselves? Many Strong Voices brings together inhabitants of the Arctic and small island developing states to address the threat of climate change, and bring security and sustainability to coastal communities there.

The 2009 film Lessons of the Loess Plateau looked at the large-scale environmental restoration project undertaken by the Chinese government and the World Bank in the China’s northern region. Over the past one hundred years, the plateau has suffered from accelerated soil erosion as unsustainable agricultural methods were introduced, leading major organizations to join the movement for it to be restored.

Another memorable ad from WWF: ‘Stop climate change before it changes you.’ The campaign depicts an uncomfortable reverse-evolutionary world, and the image below, launched in 2008, remains one of its most hard hitting. 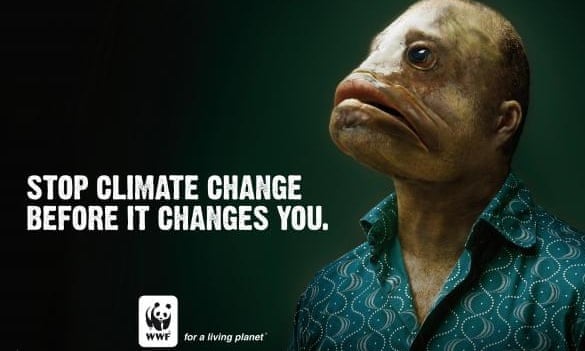 Very rarely organizations hand over creative control to students from around the world, but Connect4Climate did just that with its iChange competition.

Anti-oil activists Liberate Tate have gained notoriety for their attempts to stop the art gallery receiving funding from petroleum company BP. Their acts of ‘creative disobedience’ have included a naked man being covered in oil and carting a 1.5 tons wind turbine blade into the gallery’s main hall.